What is ragwort poisoning? 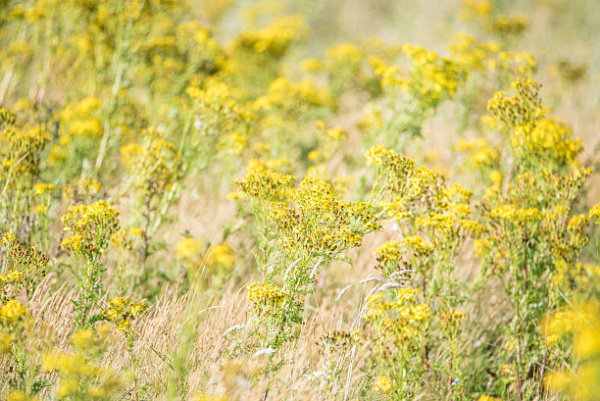 Tansy Ragwort (Senecio jacobea) is a tall daisy like plant with yellow flowers that grows in hayfields, pastures, ditches, and other unimproved areas. Most growth occurs in areas receiving over 50cm (19.6 inches) of rain annually, although irrigation of pastures may allow growth in drier areas. It is typically seen in northwestern states, California, New England states and states surrounding the Great Lakes.

Ragwort is a biennial plant. In the first year, a flattish crown of branched leaves is formed. This flat crown is resistant to mowing and often goes unnoticed.

In the second year, yellow flowers are produced on stems that are up to approximately 31.5 inches (80 cm) high.

Tansy ragwort contains chemicals which can cause liver damage, called pyrrolizidine alkaloids. Ragwort is mainly a concern for grazing livestock such as horses and cattle. The plants are bitter tasting so grazing animals usually will not eat them unless the pasture is heavily contaminated or there is little other food available. A single ingestion of tansy ragwort is not likely to cause poisoning unless very large amounts are consumed. However, ingestion of tansy ragwort over weeks to months can lead to scarring of the liver and liver failure. The toxin is stable even when the plant is dried so poisoning can happen when the plant is incorporated into hay. The most common cause of ragwort poisoning is from eating hay that includes dried ragwort over weeks to months.

How much ragwort is needed to cause poisoning?

Generally, horses need to ingest 1-5% of their body weight, about 12-60 pounds of ragwort, over several days to weeks for poisoning to occur.

What are the signs of ragwort poisoning?

More specific signs of poisoning are usually not seen for several days to months after horses begin eating the plants. Damage to the liver occurs over time and is often irreversible once clinical signs are noticed.

Although poisoning occurs over time, once the liver fails, sign may appear to develop suddenly. Most horses will be described as “poor doers” in the early stages of ragwort poisoning, with a non-specific decrease in appetite and activity level. Weight loss, diarrhea and poor hair coat may also be seen. More severe signs include yellow coloration of the eyes or skin (jaundice), distended abdomen, and excessive sensitivity of the skin to sunlight (photosensitization), resulting in burns and skin lesions with hairless or light-colored haired areas being more sensitive.

When liver failure occurs, certain toxic substances are no longer removed from the blood and may cause effects on the brain (hepatic encephalopathy). Abnormal behaviors including profound depression, compulsive walking, head pressing, apparent blindness, and convulsions may occur. Horses developing these signs may become dangerous to handle. Most severely affected cases die within days of symptoms appearing.

How is ragwort poisoning diagnosed?

Most cases are diagnosed in horses or cattle that have the expected signs and a known or suspected ingestion of ragwort. A history of ragwort ingestion may be difficult to confirm due to the time lag between ingestion and the development of clinical signs. Depending on the season, a person skilled in pasture management may identify the weed in the pasture or hay. Blood work confirming liver damage supports the diagnosis. A liver biopsy is required to identify the typical microscopic changes within the liver that confirm the diagnosis.

How is ragwort poisoning treated?

If you suspect that your horse has been exposed to ragwort, contact your veterinarian or Pet Poison Helpline, a 24/7 animal poison control center, at 1-800-213-6680 for treatment recommendations.

All animals suspected to have ingested tansy ragwort should have a thorough physical examination and blood work performed to evaluate liver function. Prevent further ingestion of ragwort by removing animals from contaminated pastures or replacing hay.

If poisoning is detected before severe liver damage occurs, supportive care is recommended. Intravenous fluids, electrolyte and dextrose supplementation, B vitamins, plasma transfusion, vitamin K1, and antibiotics are possible treatments. In some cases, feeding a special protein restricted diet can reduce the severity of nervous symptoms. The liver has a remarkable ability for regeneration following injury. Less severely affected horses may be able to compensate for the liver damage, although they may still have long term liver effects. Blood work to monitor liver function may be needed for weeks to months.

Once extensive scar tissue develops in the liver, it cannot recover. Treatment is rarely successful once more severe signs have developed.

How can I prevent ragwort poisoning?

Pastures should be routinely searched for evidence of tansy ragwort. Small areas of growth can be controlled by manually pulling the entire plant, including the root. Mowing alone is not effective for control as roots left in the ground may resprout. If flowering plants are pulled, it is best to seal them in a plastic bag for disposal to avoid releasing seeds. Dried plants are more palatable than live plants and must be disposed of properly to avoid ingestion by livestock.

Biological controls including the tansy ragwort flea beetle (Longitarsus jacobaeae,), ragwort seedhead fly (Botanophila seneciella), and cinnabar moth (Tyria jacobaeae) may be useful to control growth of tansy ragwort. Distribution of these insects may be discouraged in some areas to prevent damage to native plant species. Local agricultural extension agencies should be consulted prior to releasing these insects.

Weed killers may be effective if applied to rosettes in the spring or new growth in the fall. Application of these products after flowering has occurred will not prevent the spread of seeds. Grazing animals should be restricted from areas treated with these products as directed by the manufacturer, typically for two weeks.

Do not use pasture that is contaminated with ragwort for making hay because the poison remains active even in dried plants. Plants on adjacent land should be removed to avoid the spreading of seed back into the pasture or hayfields. Planting non-invasive plants in grazing pastures provides competition to suppress germination of tansy ragwort. Always ensure that there is adequate grazing or alternative food sources, such as hay, so that livestock is less likely to eat ragwort.

Pet Poison Helpline, an animal poison control center based out of Minneapolis, MN is available 24/7 for pet owners and veterinary professionals that require assistance treating a potentially poisoned pet. The staff provides treatment advice for poisoning cases of all species, including dogs, cats, birds, small mammals, large animals and exotic species. As the most cost-effective option for animal poison control care, Pet Poison Helpline’s fee of $65 per incident includes follow-up consultations for the duration of the poison case. Pet Poison Helpline is available in North America by calling 800-213-6680. Additional information can be found online at www.petpoisonhelpline.com