What are the more common compulsive disorders in dogs?

"There may be a genetic predisposition to compulsive behaviors."

There may be a genetic predisposition to compulsive behaviors. For example, flank sucking is most commonly seen in Doberman pinschers, spinning in bull terriers, fly chasing in miniature schnauzers, and acral lick dermatitis in many medium- to large-breed dogs. The diagnosis begins by ruling out or treating possible underlying medical causes. Since a variety of medical problems including painful conditions, neurologic diseases and dermatologic disorders can cause many of these signs, an extensive diagnostic workup may be needed to rule out underlying medical problems. In some cases, trying a pet on a medication such as a seizure control medication or a medication to control pain or itchiness may be part of the diagnostic process. If the problem is diagnosed as a compulsive disorder, drugs that inhibit the reuptake of serotonin may be effective at reducing or controlling some of the signs but concurrent behavior therapy and environmental modifications are also likely to be needed. Common treatments are briefly listed here and include (a) providing a predictable daily routine, (b) providing a reward-based training approach that shapes desirable responses and avoids the use of punishment, (c) avoiding the use of rewards except when desirable behaviors are exhibited so that the pet learns what behaviors predictably earn rewards, (d) providing a few regularly scheduled social interaction sessions (including social play, exercise and training), and (e) between social interaction sessions, providing a settle down area for rest and relaxation that contains stimulating objects and toys that use food and textures to maintain interest. 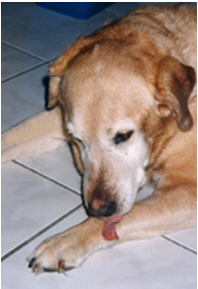 What is canine acral lick dermatitis?

Acral lick dermatitis is the skin lesion that occurs when dogs repeatedly lick at specific sites on one or more of their limbs, often causing significant damage. Large breeds such as Doberman pinschers, Great Danes, German shepherds, Labrador retrievers, golden retrievers, and Irish setters are most commonly affected. It may be caused by a medical or a behavioral problem or both. Underlying medical abnormalities (e.g., arthritis, previous fracture, skin disorders) may initiate or contribute to the problem. As the area becomes raw and itchy, it further stimulates the dog to lick and chew. The behavioral condition arises when the pet is exposed to chronic stress or recurrent situations of conflict, and this leads to excessive licking. It has also been suggested that self-injurious behaviors such as acral lick dermatitis may arise in situations of understimulation. Therefore a predictable daily routine with sessions of social play, exercise and training as well as a variety of stimulating forms of object play may help to prevent the disorder and is an important component of the treatment plan.

"The need for protection and prevention so that the wound
can heal must be weighed against the increased anxiety
that these products might cause."

With acral lick dermatitis, treatment must be directed at both the behavior disorder and the skin trauma. The first step is to rule out and treat underlying medical conditions that might have caused or contributed to the development of the skin lesions since both food intolerance and deep infections have both been identified as potential causes or complicating factors. Even if the initiating cause was behavioral, secondary infections, pain, and pruritus (itchiness) will often develop that must first be controlled. Medical therapy might consist of treatment with long-term antibiotics, anti-inflammatory agents, and bandages or collars to prevent access to the area until the lesion heals. In some cases, if the initial factors that led to the chewing can be resolved, whether dermatologic or behavioral (e.g., conflict, insufficient stimulation, lack of predictability), the problem may not recur once the skin lesions have been healed. The need for protection and prevention so that the wound can heal (Elizabethan collars, bandaging) must be weighed against the increased anxiety that these products might cause. Most cases will require concurrent treatment for the dermatologic condition as well as the behavioral therapy, including psychotropic drugs for compulsive disorders.

What is canine flank sucking?

Flank sucking occurs when the dog takes a section of flank skin into its mouth and holds the position. A genetic component has been identified in some of the compulsive disorders of Dobermans including flank and sucking. If the sucking does not cause significant lesions and does not interfere with the apparent health or welfare of the pet, flank sucking may be an acceptable “coping” mechanism. However, you should recognize that there is likely some underlying anxiety, perhaps related to insufficient stimulation or separation anxiety that might need to be addressed. Therefore, at the very least, you should review your pets daily routine, ensure consistent interactions, and provide a sufficiently enriched environment. If you suspect separation anxiety, it may be useful to play audio or video recordings for the pet while you are gone. When the behavior does cause physical damage or becomes so compulsive as to contribute to other behavior problems (decreased eating, aggressive toward owners when approached during sucking) then treatment is necessary. Behavior management and drug therapy is the same as for other compulsive disorders.

What is tail chasing or spinning in dogs?

Compulsive tail chasing may be a displacement or compulsive disorder in some dogs, but could also be a type of seizure disorder, or might be due to pain or medical illness. Some cases such as those seen in bull terriers may exhibit a more intense spinning or whirling behavior. Other concurrent behavior problems such as aggression have been reported in “spinning” bull terriers. In some cases, the problem may have started as play or displacement behavior that was subsequently rewarded by the owner. It is sometimes seen in active herding breeds of dogs that lack appropriate outlets for exercise and activity. Once underlying medical problems are treated and seizure disorders and painful diseases of the tail or perianal area (area surrounding the anus) are treated or ruled out, behavior and drug therapy is much the same as for other compulsive disorders. Head halters are very useful in dogs that chase their tails or spin to interrupt and redirect the dog to a more appropriate response. Once the dog has focused on the owner, they can be told to sit and then settle and over time the desire to tail chase or spin may diminish. Regular interactions, exercise and routine are very useful in the treatment of tail chasing in most dogs.

© Copyright 2012 LifeLearn Inc. Used and/or modified with permission under license.