Why do dogs eat stools?

What are some of the medical causes?

Any medical problem that leads to a decrease in absorption of nutrients, causes gastrointestinal upset or causes an increase in the appeal of the dog's stool, could lead to coprophagia. In addition to a complete physical examination, the puppy's diet and its stool frequency and consistency should be evaluated. Stool testing for parasites would be the minimum level of testing. If the stool is unusually soft or appears to be poorly digested, additional stool or blood tests may be warranted. Feeding a poorly digestible diet, underfeeding, and medical conditions that decrease absorption such as digestive enzyme deficiencies or parasites, could lead to malnutrition or vitamin and mineral deficiencies, and therefore an increased appetite and possibly stool eating. In addition, if the stools contain large amounts of undigested food material, there is an increased likelihood that the puppy would eat the stools.

"When adult dogs begin to eat stools, it may also be due to
malabsorption of nutrients or to dietary nutritional deficiencies."

When adult dogs begin to eat stools, it may also be due to malabsorption of nutrients or to dietary nutritional deficiencies. In addition, any condition that might cause an increase in appetite or an unusual appetite, such as diabetes, Cushing's disease, thyroid disease, or treatment with certain drugs such as steroids may lead to an increase in stool eating. Dogs that are placed on extreme calorie restriction or that are fed poorly balanced diets may also begin to eat their stools. It should also be noted that if a dog develops a taste for a particular dog's stool, that other dog should be tested for any type of condition that might lead to poor digestion of the food (with the result that excess food nutrients remain in the stool).

What are some of the behavior reasons that a dog might eat its own stools? 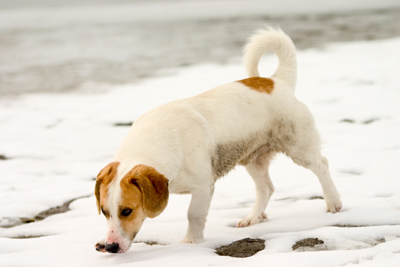 Coprophagia is a common problem in some puppies, which usually clears up by adulthood with good nutrition and proper direction and supervision. There have been many explanations suggested for this behavior. When left unsupervised, puppies may simply begin to investigate, play with, and even eat stools as a play, investigative or scavenging behavior. Since coprophagia may attract a great deal of owner attention, the behavior may be further reinforced.

There may also be an observational component, since the bitch cleans and ingests the puppy's excrement in the nest, and puppies may learn to mimic the behavior of their mother or other playmates that perform this behavior.

"The owner that uses the outmoded, inhumane and useless training technique of "sticking the dog's nose" in its stool when it has soiled the home, may be further encouraging coprophagia."

In adult dogs the innate behavior of grooming and cleaning newborn puppies and eating their excrement, along with the well documented fact that dogs tend to be attracted to infections or discharges of their pack-mates, which they will sniff and lick, may explain some of the motivation for coprophagia. Early intervention can help reduce the possibility that the behavior will become a long-term habit. The owner that uses the outmoded, inhumane and useless training technique of "sticking the dog's nose" in its stool when it has soiled the home, may be further encouraging coprophagia.

Why do dogs eat the stools of other animals?

This behavior is akin to scavenging. It is not unusual for dogs to steal food items, raid garbage cans, and chew on, or eat non-food items that most humans would consider unusual or even disgusting. Cat feces and those of some other animals often have enough appealing attributes (odor, texture, and taste), to overcome the fact that they are fecal wastes. Dogs that eat the feces of herbivores may be attracted to the digested vegetation. In fact, stools themselves are seldom unpleasant to dogs. It is one of the odors that they are constantly attracted to when investigating their environment.

How can coprophagia be treated? 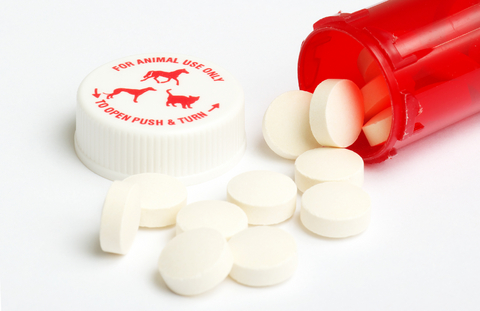 Coprophagia can best be corrected by preventing access to stools, by thorough cleaning of the pet's property, and by constant supervision when the pet is outdoors.

If you make a diary of how often and when your dog has bowel movements, you should be able to accompany him or her outdoors, wait until your dog eliminates (it can be useful to train on command), call your dog to you and have it sit for a reward, and clean up the stool before leaving your dog alone. At the first indication of any stool sniffing or investigation the dog should be interrupted with a firm command, remote punishment device or a quick pull on the leash (this is particularly effective for dogs wearing head halters).
If the dog is taught to come to the owners and sit for a special food treat immediately following elimination, the new behavior may become a permanent habit. Remote punishment and disruption devices may also be useful in that they can interrupt the dog as it approaches the stool without any direct association with the owner. A remote spray collar may therefore be effective if the owner supervises the dog from a distance (or by watching through a window to the backyard) and immediately and consistently interrupts the dog every time it begins to mouth stools.

"If the dog is taught to come to the owners and sit for a special food treat immediately following elimination, the new behavior may become a permanent habit."

Dogs with medical problems should be treated to try and correct the underlying cause. A change in diet to one that is more digestible, or one with different protein sources may be useful. Dogs on restricted calorie diets may do better on a high bulk or high fiber formula. Some dogs may be improved by adding enzyme supplements to improve nutrient digestion or absorption. Specifically, digestive enzymes in the form of meat tenderizers or food additives may help increase protein digestion, resulting in a less palatable stool. When adding some of these items to dry dog food, it may be necessary to moisten the food first and allow the product to sit on the food for 10 - 15 minutes to increase effectiveness. Other solutions that have been published but have never been proven to be effective are to add papaya, yogurt, cottage cheese or Certs® breath mints to the dog's food; these additives are supposed to impart a less pleasant taste in the stools.

Unpleasant tastes are unlikely to be successful unless the product is suitably noxious as well as odorless (so that the pet cannot detect its presence in the stool). To use a taste aversive deterrent, while the dog is out of sight, open up the stool with a disposable plastic utensil, insert the taste deterrent into the center, then close the stool and replace it for the dog to find. Most dogs however, either develop a tolerance to the taste, or learn to avoid those stools that are pretreated. Experimentally, the only form of taste aversion that is consistently effective is something that becomes associated with nauseousness.

Since most dogs seem to prefer a well-formed stool, adding sufficient quantities of stool softeners or bulk laxatives will usually deter most dogs.

© Copyright 2012 LifeLearn Inc. Used and/or modified with permission under license.